How to Avoid and Beat Jet lag 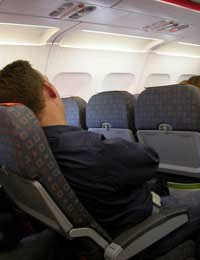 Anyone who's ever ridden on a plane probably knows what jet lag is - the disruption of ones body clock and sleep patterns that comes from crossing time zones by air travel on long flights. But what can you do about jetlag?

As jet lag (also known as desynchronosis, dysrhythmia or dyschrony) is related to the disruption of the body's circadian rhythms by the change in light-dark patterns, the best way to avoid or reduce it is to acclimate yourself to the new environment as quickly as possible.

The symptoms of jet lag, though not generally severe, can be quite frustrating for a vacationer wanting to enjoy every minute of their holiday or for a businessperson who needs to be at peak performance when they arrive. Drowsiness, insomnia, headaches, mood swings, difficulty concentrating, dehydration, lowered immunity, and digestive problems can all really put a crimp in one's travel plans; the number of days one is likely to experience jet lag corresponds with the difference in the hours between the two time zones. Therefore, a person travelling between the UK and the US (to a location with a difference of seven hours) may require up to a week to recover.

However, if you plan carefully, you can time your exposure to the sun in order to reset your body clock to the new time zone, thus avoiding or decreasing the severity of jetlag. The following are factors to keep in mind:

How To Get A Free Upgrade To Business Class