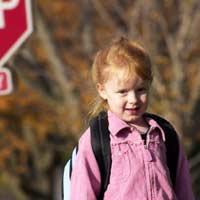 When our children are being warned about the dangers of little exercise and poor diet, it is natural to get them into walking or cycling to school or just out of the house to play. And that's great, but it has to be done with care.

Research* has uncovered important differences in the way British children use the streets compared to French and Dutch children:-

So what can you do to help avoid your child being one of those accident victims?

Make sure you tell them about the danger points listed above. It's important they realise they are responsible for their own safety when you aren't around.

Educate your child not just be telling them but by showing them the hazards on the roads. If they walk to school, make sure you do the walk with them until they (and you) are comfortable that you have identified the best places to walk, cross and where to look out for blind spots. You can do the same for the park, shops etc until you're sure they've got the message.

It's also worth remembering that if the traffic can't see them, it may be too late by the time they do. When buying coats, especially in winter when the nights draw in, make sure it is a light colour (yes, it may be harder to clean, but what would you rather have - a more grubby coat or an invisible child?)

There are also some great reflective products on the market now. Clothes can be customised with fluorescent designs or stickers and sashes can be bought from places such as cyberglow, which are the same material as industrial safety gear in some very funky designs.

On a wider note, you can campaign for traffic calming measures or more well lit crossing points to be implemented in your area. And if your child does walk to school, ask if the school has thought about implementing a walking bus scheme where highly visible volunteer parents escort the children to school each day, doing pick ups along the way much as a real bus does.

For younger children in built up areas with heavy residential parking, it is easy for a toddler to run out between cars to chase a bird or a ball so consider a rein or wrist ribbon until they are old enough to appreciate the dangers.