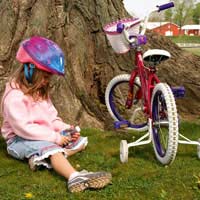 There are allegedly 800 million bikes in the world, double the amount of cars, and they are a very efficient and eco-friendly way of getting around. Children love the speed and independence gained from having a bike, no matter how small they are, and BMX and mountain biking have re-invigorated generations of cyclists who just used to use them to go to school on.

However, on increasingly more crowded roads, cyclists are at risk of accidents and children especially, generally because they don't have the right protective kit on or simply aren't seen by the motorist.

According to Transport Research Laboratory data, child cyclists make up just 6.6 per cent of road cyclists, yet they account for a disproportionate number of accident deaths. Government figures show that child cyclists are more than three times more likely to die on Britain's roads than adult cyclists and that seventy per cent of all cycling deaths and over half of all cycling injuries involve a head injury.

What Can You Do to Minimise the Risks to Your Child?

Basic bike checks for safe cycling are simple things and should become second nature for your child each time they ride their bike. Most children love to tinker with their bikes and get good and greasy doing it; so encourage them to be their own mechanic but just check they are doing it right until it is second nature. Look at it as a good weekend bonding opportunity!

When you want to teach your children basic road safety on a bike, there's no better way than by example. Either you or your partner should go out with them and explain everything that's going on and what you're doing and why. Keep them in front of you so you can see them.

When Using the Roads